I purchased the Velocette MAC racer from Col and Marion early this year.
The mac has quite a history about it.  It was built in its present form by a past member John Spencer.  The engine is of special interest as it was built by a man named Ray Head and the engine NO. is ray head MK1.  Ray Head built the motor around 1950-51 using his own alloy castings including d/s crankcase, barrel and cylinderhead based on ktt style.
All the cycle parts came new from Markwells as they offered John Spencer all the Velocette stock they had when they closed down.
When John made up his mind to get out of motorcycling, Col and Marion purchased his collection of Velocettes. Col gave the little velo a few outings at Lakeside but found the velo had an appetite for exhaust valves because of its willingness to rev. 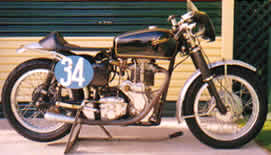 But Col got that sorted out, it was the velocette clutch that Col in his words "decided that I really did not need to go racing anyway:. Dad and I had always talked about what a perfect size it was for me, and being black and gold helped too.
So when Col and Marion told me it was for sale there was only one answer, Yes!
The little mac already has had its first outing at Lakeside. And shown that it needs a bit of sorting out, but I think I will keep that for a future story.

Yours flat on the tank
Greg