The venue for this rally was Evans Head and the hosts were Alan and Lyn Stratton. The whole Stratton family backed them up and the Northern Rivers Motorcycle group supplied many of the marshals. The rally pack was done well to suit those of us with absent minds and if in doubt of what to do next you just consulted the programme supplied in the pack. Name badges were also included; we only had to remember to wear them if we could find them. Evans Head is one of the jewels in the crown of the Richmond Valley and the promotion of the run to the locals had them well informed of our pending arrival. The locals gave us a hearty welcome.

I camped at the Silver Sands Caravan Park and arrived midday Thursday to pitch the tent in sparkling sunlight which warmed me immensely, so a dip in the Ocean soon followed. The beach was so picturesque that I thought I had found heaven on earth. There was a rock wall to my right as I was scanning the Pacific Ocean, further inspection revealed it to be the break wall for the river mouth. The tide was coming in at a great rate and a small fishing boat was trying to get out to the ocean. The boat failed to out power the tidal force and did a U turn back up the river. 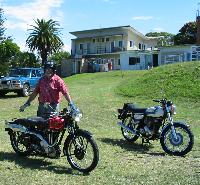 Seeing first hand the power of nature I decided to return to my campsite and refresh for our evening meal at the Bowls Club Chinese restaurant. I met up with a lot of familiar faces and some people that I had not met before. Members from BSMCC included Brian Flemming, Mark Single and me. There was a large contingent of people from other Brisbane Clubs together with some past members of BSMCC. Friday rolled around and after cooking breakfast and finishing setting up it came time to start the Ariel and go to the start point of the rally at the RSL club.

“Did I use both start and Ariel in the one sentence”? My apologies for that grammatical fau paux! True to form, the Ariel refused to start; I had ridden it onto the trailer so why would it not start now.  I did all the usual pre checks, like fuel, clean spark plug and points but only wispy yellow spark was present. Oh Dear!!

After many kicks of a 500 single and some flat ground pushing only one thing could save me from exhaustion. I needed a Hero. Adrian Hannon came to the rescue; his weapon was a can of CRC points cleaner. Spray this on your points and allow a couple of minutes for it to dry he stated. Kicking the motor with the plug out revealed a big fat blue spark. If that would not start it nothing would. Yes, plug back in and it started first kick. Off to the starting point late and dehydrated, lucky they put cold water at the check in. Just enough time to take a few photos then run back and zip up the bag to get last place on the long run. There were 95 riders on the entrants list and apparently a few who joined the run making it almost 100 bikes rumbling along country roads. From my position it looked like a giant snake winding up the countryside. What an awesome sight. 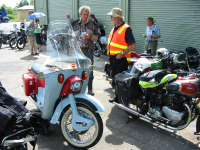 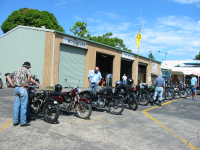 Fridays run was a follow the leader run and there was one pretty red and light blue leader present though probably located mid pack and not at the lead. The rider of the leader was Alan Donovan who comes from the north side of Brisbane. The run broke into 2 parts as the slower bikes took a kinder run to the next meeting spot being the SES Shed at Woodburn.

The countryside was a magnificent bushland setting displaying many types of flora including bottle brush trees and other banksias then blending into sugar cane fields and dairy farms. Threatening clouds appeared but did not unleash upon us making it a near perfect ride. 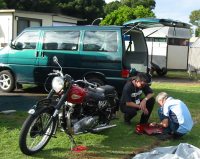 At the SES Shed at Woodburn we were given a tour of the rescue vehicles and afternoon tea. “Thunderbirds are go” for the rescue machines without a real thunderbird triumph on the rally. Alan Stratton is a volunteer with the Woodburn SES but the Head of the establishment complained of him being away on too many motorcycle tours to be on call these days. I do think that the rescue boat will be in service straight after our rally as torrential rains fell from Friday night and barely let up on our whole tour.

The rally went onto Tuckurimba Hill where we were able to look down on the valley below. We could see the Pacific Ocean and the sugar-mill sending us a smoke signal to indicate where we were to go next. We could see the twisted ribbon road we had just been on well below our lookout point. The Watson’s, three generations of Ariel riders gathered for a photo on Tuckurimba Hill.

Soon we were back into the valley we perused from the lookout. The marshals guided us well at the points needing caution to cross busy hi-ways. This is the point at which I should say the management of the rally and material provided in our sample bag was very well done that even if we got lost the Programme would have got us back to the RSL. The photo chosen for the front of the Programme would be enough to earn the tourism grant to keep all who attended to put it onto their return to list. When you are a puzzled stranger to an awesome place like this you could easily find yourself misplaced and the material supplied and the locals would have you enjoying yourself where you were bamboozled. Thanks to all who put me back on track. 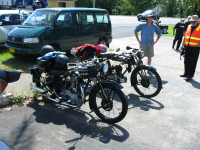 On return to Evans Head many of us needed petrol and we had a social at the only garage in town, which was the only one we knew off. It sold ice as well so there was my refrigeration for the night.

Next process was to scrub up for the sportsman buffet at the Evans Head RSL. The entertainment on Friday night was a Patsy Kline tribute singer with another male vocalist. Some of the more romantic took to the dance floor but the males sure outnumbered the females. Luckily I asked a princess for a dance and she accepted, thank you Brenda, you made my night. 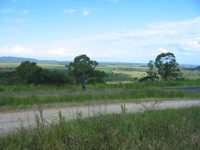 I drove my mates back to the campsite for a peaceful nights sleep for all after such a good evening. Alas at 2am Saturday morning the corker of all storms was about to sour my champagne tastes of the rally. I heard a clunk on the trailer and thought I would wait until morning to attend to it. However the strong smell of petrol fumigating my tent said I should get up and look for its source. I looked for my well wrapped bike but it was not standing. I had to try to lift it up in a mud pit in the pouring rain and gusting wind. Which was not easy in ones PJs and thongs! I finally overcame the traumatic situation but I do have a severe head cold whilst writing this article.