Photos and Story by Graham Ward

The Sun Tour is an eight-day camping tour open to motorcycles manufactured prior to December 31, 1980.

This annual event is organised by the Sunshine Coast area of the Historical Motor Cycle Club.
The tour this year started from the Maleny Showground on Saturday August 16, with twelve bikes and a Nissan utility towing the chuck wagon trailer. The Nissan carried the riders camping gear etc, with the trailer carrying the cooking gear and supplies. The bike line up consisted of five Moto Guzzi, four BMW, one Triumph, one BSA and one Norton. Three BSMCC members were in the tour group, all Guzzi mounted.

The first days ride, 359 Klm, took us through Kenilworth, Gympie, Widgee and Wooluga, to our destination for two nights at Biggenden, where we camped at the showground. This site is opposite the well-known Douglas collector, Alan Cunningham. Alan was very obliging and allowed us a tour of his collection the following day. The first day’s ride was not without drama, as one Triumph lost spark on one cylinder and was replaced with the BSA. The remaining Triumph broke the coil bracket but was repaired with cable ties and one Guzzi was halted with a roofing screw in the rear tyre. This machine was loaded on to the trailer to receive a new tyre when we passed through Kingaroy.

Day two was a more leisurely outing of 293Klm, which took in the local scene, visiting the Paradise Dam and on through Cordalba to Woodgate, for lunch by the sea. The road to the dam would have to be the best piece of motorcycle bitumen that we covered in the whole of the eight days, with its constant radius corners through hills and gullies. More drama on this run! With the Triumph breaking one of its two throttle cables. With the cable replaced we took in the highlights of Childers on our return to Biggenden, for another night by the campfire. 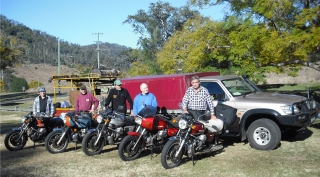 From Biggenden we headed west through Ban Ban Springs, Murgon and Kingaroy, to our next night’s destination at Somerset Dam, a distance of 323 Klm. With the temperature on the low side and southwesterly winds blowing, the pie shop in Kingaroy seemed a great place to await the fitting of a new tyre on the Guzzi.

Our next three nights were to be at the Murwillumbah Showgrounds, with the route taking the group through Rosewood, Harrisville, Beaudesert, Canungra over Beachmont to the Numinbah Valley and on to Murwillumbah. This day’s riding being a distance of 317Klm. This of course included the mandatory stop at Chillingham, for a chocolate-coated banana. More drama in the mechanical department on this leg! On arriving at Beaudesert one of the BMW riders was complaining that there was a huge reduction in power. The power loss was found to be a front brake calliper locked on to the disc. This problem was remedied by removing the calliper, placing a six-inch shifter between the pads. The calliper, with shifter attached, was then taped to the crash bar. 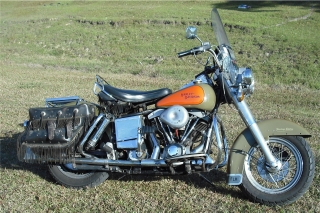 Wednesday was to be a lay day, with the option of a short run to Tyalgum for morning tea and then on to Clarrie Hall Dam at Uki, with lunch at the Uki Hotel. The latter being my choice and covered a distance of 131Klm. Wednesday night three visitors from the Gold Coast, Steve Wall and his two sons, Karl and Brett, joined us for the night. This was a pleasant surprise as Karl was riding the Harley Davidson (John Deere) previously owned by our late member John (Bucko) Buckley. Karl’s wife is Bucko’s niece and the HD has been repaired to its former glory following the accident that took our old mate.

Thursday was a tour of the local areas taking in the high country from Mullumbimby through Federal, then across to Bexhill and up to Alstonville and Bangalow before returning to our base at Murwillumbah. This area has some great scenery as you pass through the rain forest over looking the valleys, although the road surface leaves a lot to be desired, requiring good concentration to avoid the many potholes.