Saturday morning arrived and a bedraggled me peered out of the tent to see the president checking his bike after it had ended up on its side also producing a petrol spill. He had woken his wife to help him lift in up in the pouring rain and pitch black that the night dished up. I thought mine would not start again so at a respectable time I broke the peacefulness of the morning to hear it roar to life.

I still parked on the hill near the RSL as I did not trust it to kick start after being caught in the rain once again. Start time was 9.30am daylight savings time. I being from Queensland saw it as 8.30am and was there in the bare nick of time. A very enthusiastic editor of the Horses Mouth braved the threatening rain to take photos of the group leaving. Super woman came to mind when I remembered this was the same woman who had to help her husband at 3 am in the morning to bring his 500 twin Ariel back to its feet in the storm. This event is where the majority of their articles come from so you can’t afford to miss anything.

I had wished all those on the bus a good trip and they exchanged that for their sympathy for all the riders facing more storms that were predicted. The forecast were correct, unfortunately we all got drenched on our way to Casino. Morning tea was done by the Woodburn Bowling club and it was a shame to leave the comforts of the hall and all its wonderful refreshments to don our soggy bike wear and make way in the stormy weather to CMCA Village for the bike show.

Have you ever attended a bike show in the rain? What should have been such a thrill was hampered by the constant threat of a downpour. Those who spent time to polish their bikes were rewarded with another shower to rinse them off. The numbers on the headlights were just legible giving the judges extra work in deciphering them. After ducking for cover we heard the Mayors welcome speech. The mayor was also on the bike judging panel.

A hot roast lunch was delicious and warmed us to the heart. Soon after it was time to put on the wet weather gear and head back. You will notice the absence of the description of the magnificent scenery. We will have to come back another day to take it all in. It’s hard to appreciate it with rain falling on your visor and staying upright is the most governing factor.

The presentation dinner was well prepared and no storm could get us here. No storm popped up at the AGM before dinner either. All went to plan with almost all the position filled with the previous committee. For entertainment we had to work out what many antique items were used for, fill in a sheet and your table be judged for the most correct answers. Kay Hammond ended up the Queen of Ariel for the night, provided with crown and gown for the occasion. Winners of trophies all felt well rewarded and would be listed in the next “The Horses Mouth” which is the quarterly journal for the ARR. 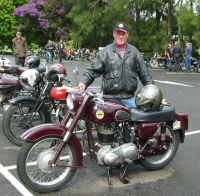 After the dinner I had to face another night of my tent being buffeted by gusting winds and left in total amazement that it did not blow away. Awaking early and breakfast in the dark had me ready to attend the 6 am swap meet. Arriving early at the venue had me checking other places in case I got it wrong. On return to the RSL I noticed a couple of cars opening up with Ariel parts for sale. I was extremely lucky to converse with an absolute gentleman who rallied to my cause of obtaining the correct speedometer for my bike at a very reasonable price.

Sunday looked a little better for weather conditions. Still I donned the top half of my rain suit as a precautionary measure. The run to Tevan in the mist allowed us to see some of the spectacular rainforest and vast rural layouts. Morning tea was in “The House with no Steps” and many meaningful conversations occurred here. I met Gary Alve from New Zealand who told me the surprise his wife Jan organised for him by sending him to this rally. Of course it clashed with the New Zealand Rally for Ariels as well. Barry supplied the bike. A special welcome was made at our dinners to these people who came over from another land bringing with them a unique sense of humour.


Invitations were given to visit New Zealand and drop in to see them at the Opossums shop. I would put that down to one of the must do’s in the future.

For lunch we ended up in a beautiful little town by the name of Clunes. The lunch was delicious and was provided by the Northern Rivers Motorcycle club. They showed us their catering trailer which had just been completed. 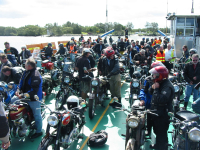 We all received an invitation to come down to their rally being held in November. They could not promise good weather but supplied us dessert for free to let us know the catering would be top notch. More scenic adventures, riding next to rivers and crossing bridges led us to the ferry stop at Burns Point. I was amazed that all the bikes fitted onto the ferry in one go. What does nearly 100 bikes look like squeezed onto a ferry? Picture provided below with many riders praying that it does not sink. It was a very social interlude and when we departed the ferry we knew the run was soon to be completed.

So that described the rally but there is much more to report and I will leave that for later issues. This was a very well planned event but I would like to see some of the same scenery on a fine day. I intend to go on the Northern Rivers Rally to have some more of the local’s hospitality and get to take in the views of the region.