This 1942 Indian 741 Scout was dug up at a mates building site on the outskirts of Ipswich a few years ago. Yes it was excavated from the earth where it had been buried for about 25 years. When removed from its tomb it appeared to be a hopeless effort and the restorer's wife thought only fit for the dump. This now looks such a fine machine anyone would doubt the story about it. It is a prime example of what can be achieved by our real enthusiasts and with club mates to help you through any project. The owner worked on this machine every weekend for two years and never lost site of this finished result despite all the difficulties he encountered. The fenders were sourced from Perth and are sports scout replicas and the other tinware was made locally by expert sheet metal workers. This bike is an inspiration for us all, something to reflect upon when some of our restoration tasks seem insurmountable.

A good display of a spotless 1966 BSA lightning A65. The owner served in Vietnam and met the owner of this bike whist in the service. The then owner lived in Messa Arizona and ended up to be the proprietor of Messa Motor Cycles. This was a bike shop that had been in business for 50 years but the inevitable occurred when motor cycles lost their popularity and the shop closed down. As the present owner had shown interest in such a machine whilst together with the proprietor in the army a promise was made that he could have it when in was no longer needed in the states. When the shop closed the bike was packed up and sent to Australia. It was not a pretty sight on unwrapping and a full restoration of paint and chrome work was needed to form this machine into mint condition. Little mechanical work was required as it only now has 14,000 original miles on its clock. This machine has been restored for ten years.

1960 A10 BSA 650cc Golden Flash with a DJP sidecar. The current owner is only the second owner of this machine.

This 1951 Vincent Rapide 1000cc was restored 25 years ago and has been kept immaculately since. The owner bought it about 4 years ago from Sydney and rides it regularly on Historical runs. He has clocked up 9000 miles on it since he has owned it. It is pictured here in amongst all the other motor cycles that turned up at the Mt. Glorious combined run. 113 bikes turned up on this occasion, they just get bigger every year. 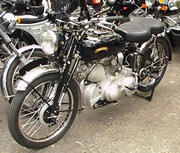