photos and story by Graham Ward

At the national BSA club held a rally on the Gold Coast recently with a display of machines at their caravan park base, on the Saturday afternoon.

There were some fifty-five bikes on display with some very interesting models to be seen. The oldest machine was a round tank, which is shown in the photo to the left. Kev Foley, seen here with the bike, is restoring a very similar machine and was pleased to be able to photograph this bike in detail, as he said that there is very little material available to go on. 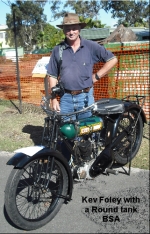 Another rare machine was a 650cc Super Flash, the sporting model of the plunger heel series that preceded the Road Rocket.

.Gold Stars were also out in numbers from the first pre-war models to the last DBD series. There was a great line up of Goldies including Rocket Gold Stars. There was a beautiful V twin on display but a good photo was not available.

The area used for the display was very restricted which unfortunately meant that the bikes were lined up too close to allow photographs, good enough for reproduction in our Kickback, to be taken.